Transform Tuesday is here again! Sure it might be a Wednesday, but unfortunately the Fremont data center that two of our Linodes are hosted on went down yesterday (http://status.linode.com/2010/11/fremont-power-issues-rfo.html) !

This installment has a bunch of new transforms and I'm going to show off some that @achillean did integrating both Shodan and Exploit-db! Our transforms show integration with the Facebook graphAPI as well as some new DNS transforms (SPF and SOA).

Lets get to the good stuff!

Facebook GraphAPI:
I'd like to preface this by saying that we are not trying to break the terms of use of Facebook and we think that we completely abide by the principles listed on http://developers.facebook.com/policy/:

However if we are asked to take down the transforms we will of course.

What are the Facebook transforms?
A quick example:
So let's take a look at the phrase 'TSA' on Facebook. Simply drag a phrase onto your graph, set your slider to 255 (3rd notch) and run the 'toFacebookObject' transform. You should see results like this:

Next you can take all of these entities to other entities with the use of Named Entity Recognition (NER) via the 'toEntitiesNER' transform. This will try and extract things like Companies, Locations, and other entity types from the messages. NER is not perfect, as you will notice things like 'Pat Downs' as a person. Keep in mind that NER is very difficult to do! However you can immediately get some results from what is being said in the public Facebook space, such as: 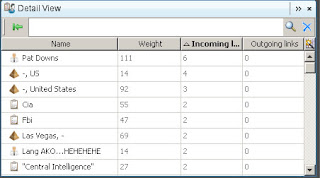 From the screenshot above you can see that the term has connections to the US, deals with two agencies and Mr 'Pat Downs' - someone I think many people can now relate to at this point in time!

Other things you can do is take each of the facebookObjects to Person entities so that you can then perform other searches on these people or identify people commenting a lot on the phrase you originally searched for. To do this you can simply select all the facebookObjects as before and run the 'toPersonFromFacebook' transform: 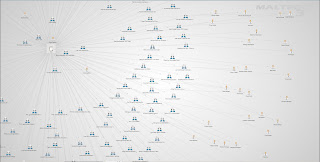 So why are these Facebook transforms useful:
How to get these transforms:


SPF/SOA Transforms:
Recently the topic of spam came up in the office and why SPF(txt) records were never implemented - they seem to be a viable means to stopping spam. We looked at the implementation a bit and noticed some very cool things, such as:
Secondly a transform RT has always wanted has been one that looks at the SOA records for domains to get the zone's administrative email address and the primary name server (where the zone was created - this is not necessarily one of the current nameservers). These transforms often provides information that's not found in the normal enumeration process.

We have developed two transforms specifically aimed at these:
Hereby some examples of using these transforms:

SPF Transform:
Compare the NS of pentagon.mil (left) to the NS found in the SOA record (right): 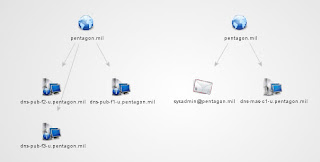 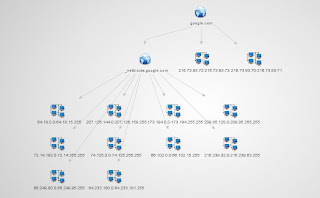 These transforms have been added to the standard infrastructure seed which can be found at: https://cetas.paterva.com/TDS/runner/showseed/Infrastructure

Shodan:
This week there has been a lot of coverage of the Shodan transforms, developed on the TDS. The transforms essentially allow the integration with the fantastic shodanhq.com as well as exploitdb.com.

The transforms are as follows:
Some examples:
Identify hosts belonging to google.com: 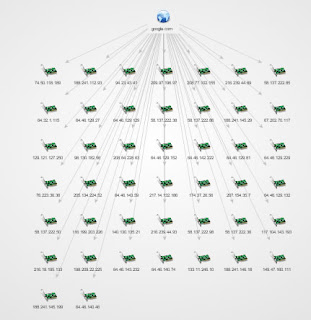 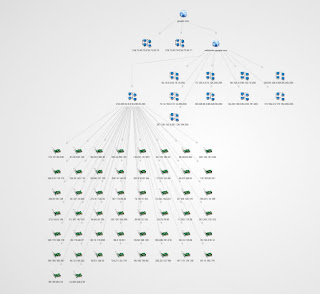 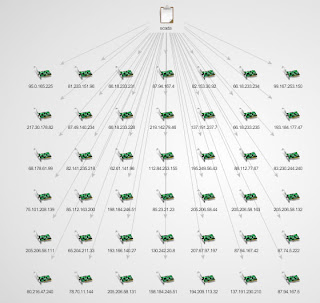 Overall these transforms are awesome, and it is great to see people building (and releasing) transforms via the TDS! Hopefully we can see improvements on these such as:
Where can I get the shodan transforms?
The Shodan transforms can be found at http://maltego.shodanhq.com/

Finally, apologies for the Goliath of a blogpost. When I started it this morning it didn't seem like that much, but it's grown quite a bit. Special thanks to the Shodan guys for developing some awesome transforms.

Damn the man. Save the Empire.
-AM